Dow Chemical Is No Bargain

Dow Chemical is one of five chemical stocks that I am short against a long position in Eastman Chemical, a security that I believe is far more attractive (I explain my long case for Eastman in this article). In light of the Third Point letter on Dow Chemical I want to explain why I view shares of Dow as relatively unattractive.

Dow Chemical trades at an expensive valuation compared to its chemical sector peers. As seen in the charts below, Dow has one of the lowest EBITDA margins in the chemical sector yet trades in the middle of the group in terms of valuation. 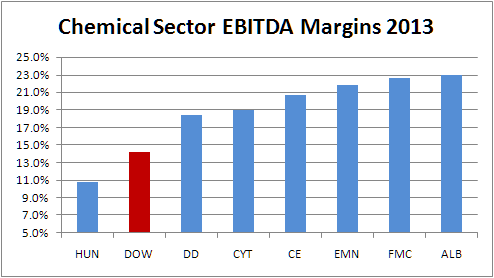 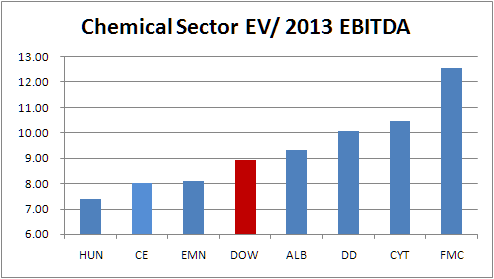 This comparison is generous to Dow as it ignores Dow’s $9 billion unfunded pension liability. If one includes the pension deficit in Dow’s enterprise value than EV/EBITDA is roughly 10 times. This adjustment puts Dow squarely in the high end of valuation versus its chemical peers despite a low quality mix of businesses.  An analysis based on P/E ratios would make Dow look even more expensive.

The Third Point letter points to “cost cutting and operating optimizations that could amount to several billion dollars a year in annual EBITDA”. Dow Chemical has announced multiple restructurings & layoffs over the years leading to the lowest SG&A/sales ratio in the chemical sector. Dow’s SG&A is only 5% of sales. This suggests limited room for margin improvement through cost cutting. Where else will the cost cutting come from if not from SG&A? Are they running their crackers inefficiently? Are they selling commodities at below market prices?

The Third Point letter gives no details of what operating optimizations could save billions so it is difficult for me to refute that point. However, later in the letter Third Point complains about “poor segment disclosure combined with Dow’s opaque and inconsistent transfer pricing”. This is seemingly contradictory. If Dow’s disclosures are poor, than how can Third Point be certain these optimizations are possible?

Justifying a high price target for Dow Chemical involves placing a premium multiple on every business line (while ignoring the pension deficit). If one takes any diversified chemical company and puts rich multiples on every segment than all of them will look cheap, with tremendous upside. There is no reason to believe that Dow will achieve these rich multiples. Proponents of Dow point to spin offs and asset sales.

It is unclear to me why spin offs will help Dow as their blended businesses already trade at relatively high multiples. Axiall, which is the comp for the business Dow is planning to spin off, trades at only six times EBITDA. Dow owns numerous low margin, commodity businesses that deserve to trade at low multiples. With Dow trading at roughly 10 times EBITDA (including pension) that means that the rest of Dow trades at well over 10 times EBITDA. Secondly, why would these spin-offs trade for best of breed multiples if they don’t perform like best of breed businesses?

Significant asset sales seem like a pipe dream as well. Dow and Dupont are the two largest US chemical companies. Both have activists and both are looking to sell assets. If the two largest companies are sellers, who will the buyers be? It is possible that Dow and Dupont will find buyers for some businesses but any sales are unlikely to be significant to either company.

Dow Chemical appears to be among the most overvalued chemical companies relative to its peers. Spinning off a business is not a magic elixir that turns around a business. There are higher quality companies with great managements available at cheaper multiples (see Eastman Chemical). A fixer upper is not always a great deal and can often be a money pit.
Posted by Tsachy Mishal at 1/27/2014 07:36:00 AM No comments: