At the time I theorized that if some of that $60 billion came back into the pharmaceutical space we could see a nice move in the sector. Pfizer/Wyeth received anti-trust approval in mid October and Wyeth received anti-trust approval a few weeks later. As you can see Pfizer and Wyeth both rallied by about 20% in the next 2 months. The market rallied as well but not nearly as much. From Yahoo! Finance: 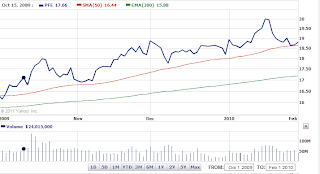 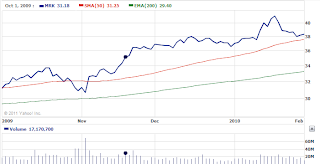 I see many similarities to the current situation in large cap biotech. Genzyme makes up 11% of the biotech sector with a market cap of greater than $10 billion and well over 5% of the entire biotech sector. If part of the $20 billion from this deal finds its way into other biotech stocks we could see a rally in the sector. The sector is unloved so if the sector begins to rally we could see those underweight the sector jump onboard.

Sanofi said the deal should close early in the second quarter. I was expecting a quicker closing but still expect the trade to be rewarding.
Posted by Tsachy Mishal at 2/16/2011 08:44:00 AM