The market is now overbought as seen in the chart below. However, the current overbought reading is weaker than the ones we saw earlier in the rally. This points to a loss in momentum, otherwise known as a negative divergence. A strong overbought reading has positive medium term implications as it speaks of a market with a lot of underlying strength.

There is also a negative divergence in the number of new highs. On November 4 there were 569 new 52 week highs on the NYSE. During the current rally the highest reading was 431. Even though the market has made a higher high, the number of stocks participating has decreased. The reason I say the market is overbought is that we are dropping high numbers from the 10 day moving average of the advance-decline line. The numbers we are dropping are shown below. Today, we are dropping 1727, meaning that a number below 1727 will start taking the line lower. We would need a monster rally today to get a reading higher than 1727. Over the next eight days we will only be dropping a single negative number of any size, meaning that the line on the chart will likely be heading lower. 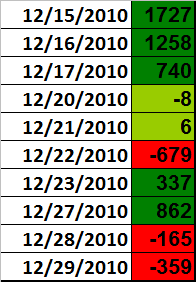 In addition to the sentiment extremes we now have an overbought market with negative divergences. While this is the season to be jolly everything else is in the bears favor.
Posted by Tsachy Mishal at 12/15/2010 08:42:00 AM

While I agree with your conclusions, one thing about the NYSE data of late (and in general) (is that the interest sensitive, non-equity issues may be skewing the data a bit and may therefore mislead us about equity market health.

For instance the NASDAQ 10DMA of AD is a bit healthier, still showing a negative divergence from the kick off of the rally off of the late Aug bottom, but only marginally.

What are your thoughts on that? Again, I agree that we're in a position to see a correction here.

Also it's interesting that my AD data from StockCharts.com is close, but different from your data. Where do you get yours in a convenient format? Do you know where to get S&P 500 AD data that would give us a better picture of equities only?

I get my data from the Wall Street Journal and plot it in Excel. I keep Nasdaq data as well and it does look healthier, but I always have primarily relied on NYSE.

Maybe we do have to wait until after OPEX for this market to finally crack a bit and correct.