Not So Sure About That Deflation 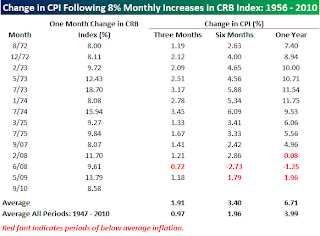 It seems the only time that higher inflation has not followed a surge in commodities was in 2008 when we were seeing a blow off top and commodity prices completely collapsed afterward. Unless commodity prices collapse odds are that we will see a higher CPI in the coming months.

I have also been seeing some anecdotal cases of higher prices in my readings recently and when booking airfare: From the AP:


The heavy freight division of UPS says it will raise rates by 5.9 percent on Oct. 18.
...On Wednesday, FedEx Corp. said its freight and national less-than-truckload units would raise rates 6.9 percent starting Nov. 1.

Caterpillar is raising prices. From the AP:


Heavy-equipment maker Caterpillar says it will raise prices up to 2 percent worldwide starting in January... The company has already announced its first emissions-related price increases of 2 percent to 6 percent. Those also take effect in January.

Prices are rising at Wal Mart as well. From Bloomberg:


The cost of a 31-item basket of goods at a Wal-Mart in Virginia was $95.75, a 2.7 percent increase from August and a 5 percent gain from the start of 2010, analyst Charles Grom said today in a report. The price is the most since the New York- based analyst began the survey in January 2009.

Taschy -- you are right on with this call. I am starting to see signs of inflation in the markets and will also post if I see this developing further.

I dont know where you stand on Gold but I just posted this thinking paper -- let me know what you think. Happy trading.

Excellent list. I would probably own some gold if I were wealthy as a hedge. Right now I need all my capital for trading.