A single up day has not made the market overbought in the short term, as one can see below. 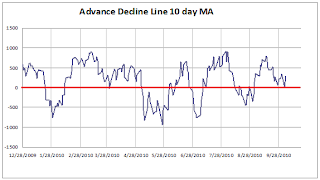 Sentiment has definitely improved but it does not seem to be extreme enough for me to get aggressively short on an overbought reading:
While I have seen some studies indicating extreme sentiment, I try to stick to the indicators that I always follow in order to avoid confirmation bias. None of the indicators that I look at are showing extreme optimism in the intermediate term. That could change if the market rallies a bit more, as I sensed some giddiness yesterday.

For now I think we are late in the game but with sentiment still not extreme I am not looking to take an aggressive short stance. That could change if the facts change.
Posted by Tsachy Mishal at 10/06/2010 08:22:00 AM