The market is currently overbought in the short term as shown in the chart below. 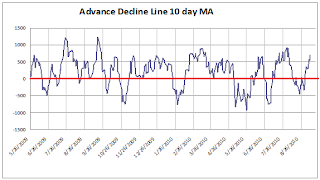 New 52 week highs on the NYSE lagged badly on Friday even though the S&P 500 made a new high for the current run. Many of the recent new highs have been in bond funds and preferred shares, which are interest rate sensitive. The recent rise in rates might be behind the deterioration in new highs but taken at face value the deterioration is a negative. NASDAQ new highs lagged as well on Friday, which are less sensitive to interest rates.

If one really tries hard to be bullish one can note that we will still be dropping a large negative number from the Advance-Decline line tomorrow, so its possible that we can get a little more overbought. Additionally, option expiration, which is Friday, often serves to perpetuate a trend.

I would note that even if we do get a little more overbought that chances are that when we finally do work off this overbought reading there should be better levels to buy at.  I believe at the current juncture it pays to err on the side of caution.
Posted by Tsachy Mishal at 9/13/2010 06:42:00 AM