The market has now done the minimum by working off its oversold condition as one can see in the chart below. However, the market will not be maximum overbought for at least another week. We have seen a parabolic move up in the past week and there is increasing risk of a short term whack but a larger correction is likely at least a week away. 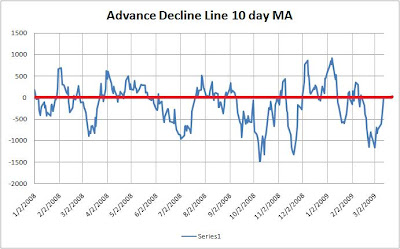 It is a possibility that the market heads straight down from here now that the oversold condition has been worked off, but I believe that is unlikely. The rally last week was very powerful. In my experience those type of rallies don't typically just suddenly disappear and take a longer time to play out.

As one can see on the chart below, on a longer term basis we are still deeply oversold. I circled the three previous tops to bear market rallies. 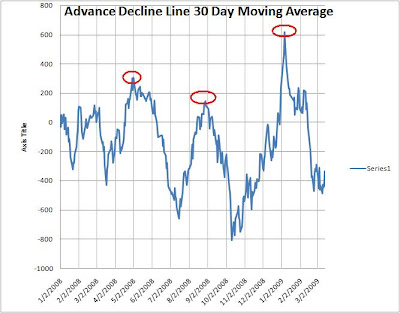 I am certainly less bullish than I was a week ago now that we rallied close to 15%. It is a little discomforting how quickly many have latched on to this rally. However, most are still under invested and this rally does have skeptics. Additionally, the pickup in M&A is also a good sign. While I am far from wildly bullish here I am still trading with a bullish bias.
Posted by Tsachy Mishal at 3/16/2009 07:21:00 AM